Some time ago I dreamt that the new issue of ‘Interzone’ featured on the cover a story about giraffes in space. When I woke up, I thought it was a good idea and jotted down some notes, but sadly haven’t written the story yet. Subsequently, I was intrigued when I saw that Lawrence M. Schoen’s debut novel ‘Barsk: The Elephant’s Graveyard’ is about elephants in space. 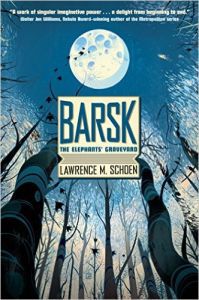 A Decade of Translations

It's ten years this month since my first translated story was published: Devotion in Hebrew webzine Bli Panika. Later in 2006 I had a story published in Greek, so I had the interesting experience of my first 2 translations being in different alphabets that I can barely read.


Since then I've gone on to be published in 26 languages - possibly making me the second most translated science fiction short story author in the world. My very short story The Gondolier has been published in 16 languages, and translated into 37 altogether, most of those appearing here on this blog.


2009 was the busiest year for translations, with 23 stories published in 17 languages.


My rate of submissions to other language magazines has slowed down in the past couple of years but I'm still sending out a steady trickle as well as scouring the web for new venues in yet more languages. It's been great fun.

Email ThisBlogThis!Share to TwitterShare to FacebookShare to Pinterest
Labels: Translation

Last year in this post I commented on some of the so-called classic SF books I've managed to read over the past couple of years. I've got through several more in the past few months:


Helliconia Spring - Brin Aldiss - Excellent, but not quite as ground-breaking as perhaps it was at the time


A Fire Upon the Deep - Vernor Vinge - Brilliant. It was like reading 2 fantastic novels simultaneously.


Slaughterhouse 5 - Kurt Vonnegut -  Original and quirky, but I was left underwhelmed

Posted by Gareth D Jones at 4:56 pm No comments: