I do like the cover art on Wesley Chu’s ‘Time Salvager’. It’s like one of those slightly blurred oil paintings and is very minimilastically atmospheric. It gives a good impression of the dystopian future that James Griffin-Mars lives in, where the atmosphere and the oceans are polluted and the cities are crumbling to ruins. 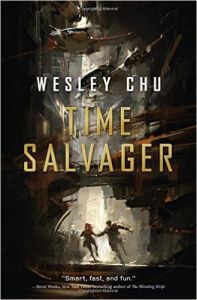 My slightly confusing story Hiking In My Head, first published in Daily Science Fiction, was translated into Polish and published in Szortal in 2014. I popped over to Warsaw and met up with editor Dawid Wiktorski  to find out about Szortal and Polish SF in general. Or maybe we corresponded by email.

Q. Is there a long history of science fiction in Poland?

A. When we compare Polish SF to, for example, American, we can see they started their expansion concurrently - in 1960s. Those were the times when Stanisław Lem wrote his most remarkable texts (“Solaris” and “Fables for robots”) and Janusz Zajdel started his writing career (for example “Limes inferior”). The Communist Period, however, turned out to be the golden age to Polish speculative fiction - our market was mainly closed to American texts, so - naturally - Polish ones were mostly favored. Not without significance was the previous political system - what could be better than criticizing it by means of fictional analogies and references?

Unfortunatelly, Polish SF lost its importance and monopoly after the opening of borders in 1990s. We were flooded by a wave of foreign texts’ translations and Polish writers gradually started being forgotten (in the good days their most influential works were reprinted over a dozen, sometimes even several dozens times!). Naturally, it’s not the end of the history of SF in but this period could be marked as the decrease of its role and popularity - those were gained mostly by fantasy that became really popular in my country.

Q. Are there any themes or styles that define Polish science fiction currently?

A. Nowadays the SF market in is so niche that it’s hard to talk about any styles or subjects that can define it. Recently there could be observed a rise of number of space opera and post-apo publications but it’s not a rule. Unfortunately I cannot foresee that fantasy would stop being the dominant genre in my country, where the market is really small, especially in comparison to the Anglo-Saxon one.

Q. How did Szortal get started?

A. The whole idea came from Krzysztof “Baranek” Baranowski (but later Aleksander Kusz was the organisator) and it was refined on a forum of a non-existing magazine. In Poland Szortal was a unique idea, before no one was interested in “shorts” (really short pieces of literature), the most emphasis was put on stories.

For a long time Szortal was dedicated to Polish writers only but about two years ago there was a section for foreign prose introduced. It empowered the whole website - not only with really interesting texts, but also promising contacts.

Q. What kind of stories do you like to publish?

A. A text has to have SOMETHING that makes you remember several thousand of signs. I don’t care about the genre or the main motif. It’s crucial for me to remember the story and that it would somehow make me wonder about it.

Q. What are the challenges of translating stories from English?

A. English really differs from Polish. On one hand the Polish language is richer, but on the other in English there are some collocations and words that don’t correspond with my language. Translating a text with a "word by word" method in case of fiction is totally impossible and the translation will always have something invented by the translator. It makes the whole process of translation unique, makes us wonder about the sound of every word, whether to translate it directly or search some other synonyms. It disables the automatisation of the whole translating process and makes every translation a challenge.

Q. What plans do you have for this year?

A. It’s the most difficult question, I guess ;) It’s hard to say what would happen this year - I certainly have plans, especially when it comes to Szortal and other speculative fiction issues, but those are too dynamically modified and postponed for non-specified future. In other words - nothing specific. But I have maaany ideas!

Posted by Gareth D Jones at 3:24 pm No comments:

Over the past few years I’ve been attempting to read some of the ‘classic’ SF books, those that won multiple awards or are always included in ‘Best Of’ or ‘Must Read’ lists. Vonda N. McIntyre’s ‘Dreamsnake’ was first published in 1978 and won the Hugo, Nebula and Locus Awards, so fits into this category nicely. 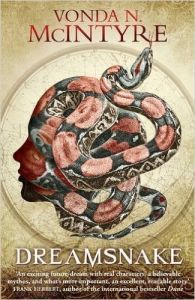