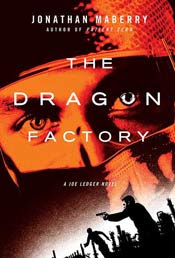 Genetic manipulation, clones, transgenics, reconstructed DNA from extinct animals, cool gadgets and high-tech computer systems – all ingredients that you may expect to see in a sci-fi novel, but here blended seamlessly into an explosive thriller that pushes the boundaries of science.

Read the rest of my review at SF Crowsnest.
Posted by Gareth D Jones at 6:37 pm No comments: 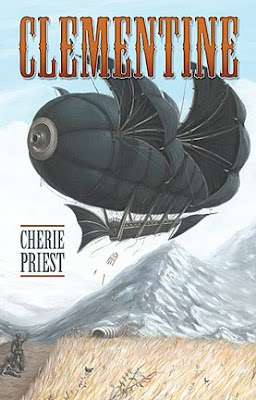 Clementine follows on almost immediately from Cherie Priest’s other steampunk novel Boneshaker, though it’s not a sequel. We follow the travails of Captain Crogg Hainey, a minor character in Boneshaker who is attempting to recover his airship that was stolen in that novel.

Read the rest of my review at SF Crowsnest.
Posted by Gareth D Jones at 6:34 pm 1 comment:

Longlisted for the Stalker Award

My story Travel by Numbers has been longlisted for the Estonian SF Society's Stalker Award in the 'Best Translated Story' category. Voting is until July 11th and the results will be anounced in August.

English translation of the site here.

I'm not sure how much of an accolade this is as there are 50 stories on the list - possibly every story translated into Estonian last year. Nevertheless it's nice to be noticed.
Posted by Gareth D Jones at 11:46 am No comments:

I woke in the night from a bizarre and complex dream and had to get up and make some notes. It could be a great story, involving a tennis academy in Yugoslavia, sun tans, mind control and a Belgian salesman. It all made sense in the middle of the night.
Posted by Gareth D Jones at 2:13 pm No comments: 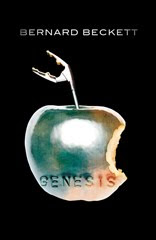 The children's paperback edition of Bernard Beckett's Genesis is out next week from Quercus Press. I reviewed the book last year for SF Crowsnest, and my review is quoted on the inside page of the new edition. I've seen my reviews quoted on numerous author and publisher websites before, but this is the first time I've made it onto a paperback, so I'm pretty chuffed. Now I just need to aim for the cover...
Posted by Gareth D Jones at 6:20 pm No comments:

The Frisian translation of Dog's Best Friend has been published this week on Ensafh, the Frisian literary website. This flash fiction story is set in the world of the Roadmaker and originaly appeared as a piece of Friday Flash Fiction. It was later published in Jupiter, where the original Roadmaker series appeared, and has since been translated into Bengali for the Sonajhuri literary webzine.

Frisian is my twentieth published language.
Posted by Gareth D Jones at 3:08 pm No comments:

I read the new issue of Jupiter this week. As usual I enjoyed the whole issue - it seems to be the magazine closest to my taste in short stories. One story in particular stood out though - Gary Budgen's A Clown in Apus. It's a brilliantly clever idea of a CERN-type set-up creating a pocket universe, set in a zoo (there is a reason for that!) The way the author has applied complex physics into a mundane setting is genius.
Posted by Gareth D Jones at 4:19 pm No comments:

Okay, I don't really use a pen much for writing, but it sounds better than saying 'from the keyboard'.

This week, Jonathan C Gillespie and I have, we think, completed our collaborative novelette Quivira. It crept up to be a novella for a while, but editing has brought it back down. It's been interesting and fun working with Jonathan, seeing how ideas develop from one section to the next as we each developed the story. The strange thing is that while editing there were some sections that I couldn't remember whether I wrote them or not.

I had intended to get back to my new novel Gap Years after several weeks away from it, but instead a new story concept that has been rattling around for a while won out and I started work on that instead. Snowdonia (not its full title) is neither a prose story nor a graphic story, but something indefinable. I think it's going to be rather interesting.
Posted by Gareth D Jones at 2:46 pm No comments:

The new issue of Jupiter arrived yesterday, and currently lined up on the bookshelf I have Ted Chiang's first novella-length work The Lifecycle of Software Objects, the new Ian McCleod collection Journeys and Patriarch's Hope, the sixth in David Feintuch's intensely gripping series.

In the post I'm expecting a review copy of Gareth Owens' Fun With Rainbows and my contributor copy of Cat Tales 2.

According to my calculations, all of that will keep me occupied until the end of June. :o)
Posted by Gareth D Jones at 2:34 pm No comments:

Email ThisBlogThis!Share to TwitterShare to FacebookShare to Pinterest
Labels: Reading 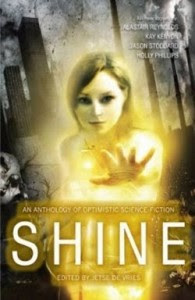 I've been looking forward to receiving the Shine anthology. One of my stories was published on editor Jetse De Vries' Outshine twitterzine, and he sent me a most encouraging rejection for the Shine anthology itself. I was also at the launch party at Eastercon and met some of the authors.

Read the rest of my review at SF Crowsnest.
Posted by Gareth D Jones at 1:06 pm No comments: