The Gondolier in Russian

I received this Russian translation of The Gondolier some time ago, but I've been unable to find a home for it. Well-known Russian magazine Esli now only publishes stories selected from profesional magazines, and I never heard back from two other Russian magazines I queried. So here it is:

Email ThisBlogThis!Share to TwitterShare to FacebookShare to Pinterest
Labels: Russian, The Gondolier, Translation

Well, it's been surprisingly busy recently in the UK genre publishing world. Following on from the recent launches of Immersion Press, CossMass Infinities, AltHist, Dark Fiction and Spectra, there is a new quarterly print magazine forthcoming entitled Singularity.

Based in Scotland, Singularity is a mixed genre, token-paying magazine containing

a range of genre fiction that takes in the best that Horror, Fantasy and Science Fiction has to offer.

I'm looking forward to seeing the first issue.
Posted by Gareth D Jones at 11:26 am No comments: 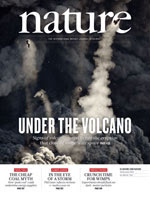 My future-steampunk story World Wire Web appears in this week's issue of Nature magazine. This is my secnd sale to Nature, and their first steam punk story. It has a fabulous steampunk gadget picture to go with it.
Posted by Gareth D Jones at 12:54 pm No comments:

After a long delay due to various circumstances, and a change of format, the anthology Quantum Genre in the Planet of Arts has now been released as an e-book. The anthology has been published by Paraphilia books and contains a huge selection of quantum works.

What is quantum genre?

Basically, the Quantum Genre is not theme-based but style-based. In other words, Quantum Works are not about quantum theory but quantum representation of characters and their worlds. The style is distinguished by a high degree of obscurity of both the narrative and characters which are subject to mutability and ambiguity.

If you want to know what that means, take a look at the revised reprint of my story Fluctuations in the anthology. When the story originaly appeared on Bewildering Stories it received some very favourable comments, which include some spoilers.
Posted by Gareth D Jones at 1:35 pm No comments:

The Best of Murky Depths 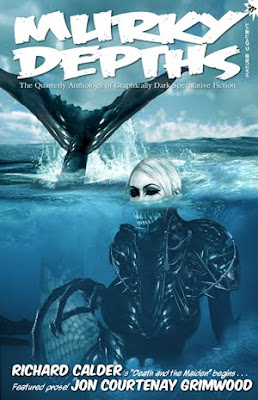 One of the people I met up with at BristolCon was Murky Depth editor Terry Martin. As revealed on his blog, we are working on The Best of Murky Depths, an anthology containing my selection of the best graphic and prose stories from the first 10 issues.

The selection has already been made, I've written a few words about each of my choices and permissions are currently being sought from artists and authors. The anthology will go out in PDF format, giving readers a chance to sample what Murky Depths has to offer.

It will look pretty awesome.
Posted by Gareth D Jones at 12:36 pm 1 comment:

At the weekend I met Del Lakin-Smith, co-founder of new genre podcasting site Dark Fiction. The first issue was launched at the end of October and I've seen it mentioned in numerous places since. Many well-known names in the world of UK genre fiction are lined up for the first few issues.

Passing me by completely was the launch of Spectra, a UK-based ezine available in several formats that seems to have appeared some time in recent months.

I shall put both on my list to get interviews and find out more information.
Posted by Gareth D Jones at 12:31 pm No comments:

BristolCon is a relatively small con in its second year, and I made the 2 1/2 hour trip down to Bristol for the weekend and attended the event on Saturday. It may be small, but it was very relaxed and friendly.

Two minor things I thought were good ideas and worth noting were:

This was a single-stream con, and I attended about half of the programme items, spending the rest of the time in the dealers' room, art show and bar (drinking tea), or lurking round the lobby.

I met up with a few people I've met before, others I've interacted with on the web, others whose work I've read, and saw several others whose names I knew but embarresingly hadn't read anything by them. I don't feel too bad introducing myself to fantasy authors whom I've not read as I don't read any fantasy, but it's a bit more awkward when it's a well-known SF author and I've not read any of their work. :o/

It's especially nice to be able to chat to fellow authors about the trials and joys of writing.

I'm looking forward to my next con.

Posted by Gareth D Jones at 1:22 pm No comments:

A new category to add to the review archives this month, with the addition of volume one of Air. I plan to review more graphic novels in the future.

The Broadcast by Eric Hobbs

I'm pleased to be able to reveal the first of the contributors to The Immersion Book of Steampunk: prolific short story author Paul Di Filipo.

We're pretty excited to have Paul on board. You can read the full anouncement at Immersion Press.

Other stories have arrived or are expected soon. Further anouncements will be forthcoming and the TOC will be confirmed in December.
Posted by Gareth D Jones at 12:56 pm No comments: 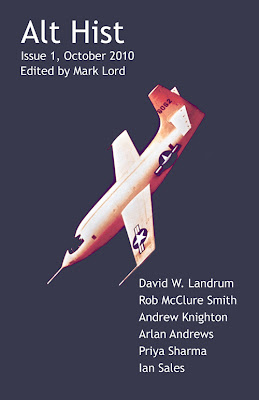 It’s always a pleasure to see a new UK-based genre magazine being launched. AltHist is, as the name suggests, a magazine specialising in alternate history and historical fiction. There are very few markets that deal specifically with this subgenre, so it will be interesting to see how the magazine fares: are there enough people writing this kind of story and are there enough people reading it? I would think the answer to both is yes.

Read the rest of my review at SF Crowsnest.
Posted by Gareth D Jones at 2:14 pm No comments:

Before I start I should point out that I’m not an expert on graphic novels. In fact, I haven’t read one since TinTin and Asterix when I was a lad. I’ve been converted to an appreciation of the more mature version over the past couple of years by the fabulous Murky Depths magazine. So much so that I’ve written a couple of my own comic scripts and the first has been accepted for publication. Anyway, enough about me, this is about Air, a series written by G. Willow Wilson and illustrated by M. K. Perker.

Read the rest of my review at SF Crowsnest.
Posted by Gareth D Jones at 2:11 pm No comments: 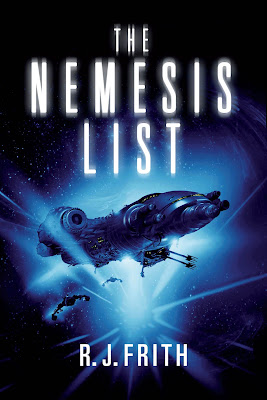 The Nemesis List is the debut novel by R J Frith, the winning author of the ‘War of the Worlds’ competition run by SFX magazine. On discovering this fact my thoughts were that it could turn out to be a brilliant book by a previously undiscovered author, or a rather dire effort that was the best of a bad lot.

Read the rest of my review at SF Crowsnest.
Posted by Gareth D Jones at 2:09 pm No comments: