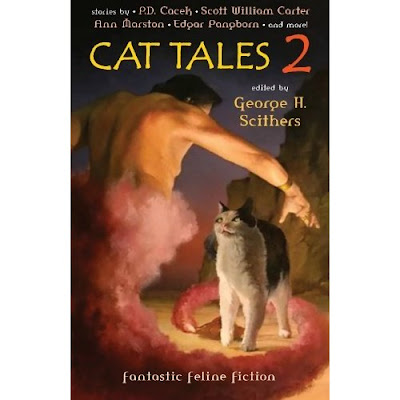 I was very pleased to note today that Cat Tales 2 has been published by Wildeside Press. It's an anthology of fantastic feline fiction that includes a reprint of my flash ficiton story Delayed Reaction. The story was accepted over a year ago without a definite publication, so I'm excited to see that it's here at last.

I discovered only moments later that editor George Scithers died earlier this month following a heart attack. Even though I've only ever spoken to George via half a dozen emails, it comes as a shock, and my symapthies go to his friends, family and colleagues.
Posted by Gareth D Jones at 1:35 pm No comments:

Drawing on my experiences over the past couple of years of having my stories translated and published around the world, I've written an article on the subject for the benefit of other writers. It should be appearing in the next issue of Focus, the BSFA's magazine for writers.
Posted by Gareth D Jones at 11:56 am No comments:

The Gondolier in Romansch

Romansch is a language spoken mostly in Switzerland, where five different dialects exist. This translation of The Gondolier is in the Puter dialect spoken in the Upper Engadine.

Email ThisBlogThis!Share to TwitterShare to FacebookShare to Pinterest
Labels: Romansch, The Gondolier, Translation

Sad news today - the small press publishers Crossing Chaos / Enigmatic Ink have folded, leading to the cancellation of the forthcoming anthology Quantum Genre on the Planet of Arts. After a couple of previous delays I was looking forward to seeing my story Fluctuations in print this month, but alas it is not to be.

Fluctuations is one of my favourite - and certainly one of my most unusual - stories. It originaly appeared in Bewildering Stories and I rewrote the ending for this anthology. I think I shall look for another new home for it.
Posted by Gareth D Jones at 2:47 pm No comments:

Today I completed my review of the 'Shine' anthology - my 100th review!

These have appeared on:

At Eastercon I met up with Carmelo Rafala of Immersion Press, a new small press who have just released their first book: Fun With Rainbows by Gareth Owens, whom I shall henceforth dub 'the other Gareth', coincidentaly the same as 'the other Gareth'.

They're also due to release a new anthology entitled 'The Immersion Book of SF', for which the line-up looks pretty impressive. Their website says they'll be specialising in single-author collections, which is good news for those of us mourning the demise of Elastic Press.
Posted by Gareth D Jones at 1:34 pm No comments:

Had a great time at Eastercon this year. I was only there for the Saturday, but met up with lots of authors, editors, publishers and others to chat about the trials of writing and other things.

The breathless, unending sentence above pretty much sums up the spirit of the whole day!
Posted by Gareth D Jones at 12:59 pm No comments: 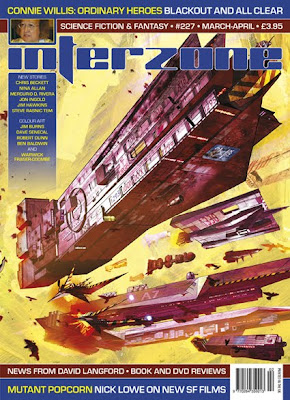 Last year all of the Interzone covers were by a single artist and the same is true this year. The added twist this time is that all of Warwick Fraser-Combs' pictures can be combined into one larger piece at the end of the year. Typically, now I have the second issue of the year I can’t find the previous magazine to put the two together. Ah well, inside to the fiction then.

Read the rest of my review at SF Crowsnest.
Posted by Gareth D Jones at 2:29 pm No comments: