My short stories tend to hang around in my head for months or even years waiting to be written. They bubble to the surface occasionally, get turned over, and sink back into the depths to cook a bit longer. There are five of them there now. The reason for this is that stories rarely come fully-formed.

My stories start life as one of several things:

Over time, hopefully these seeds will accrete the other parts necessary to make a whole tale. It’s not until I have a plot, with an interesting concept behind it, at least one definite character, a title, an introduction and fairly-well defined conclusion, that I start writing. That way I can write from beginning to end, normally in several sittings, and get a complete draft. The plot in the middle may change along the way, the character, concept or location may transform into something else and the title may change, but at least I don’t waste the limited writing time I have available.

It’s the cooking that counts. Excuse me while I go and stir a few ideas again.
Posted by Gareth D Jones at 2:00 pm No comments:

My short story Mercurial Nights has been accepted by semi-pro magazine Ray Gun Revival, which specialises in Golden-Age style space opera and pulp stories. It's nice to find a magazine that seems to suit a story perfectly and for it to be accepted.

Mercurial Nights should be on-line in the next couple of months.
Posted by Gareth D Jones at 1:02 pm No comments:

I've finished the second edit of Gap Years, in which various critiquers point out spelling, grammar and other problems. Most of the 9 parts of the novel have been looked at by a selection of different people, and I've taken the comments I thought useful and made changes accordingly.

The next stage is a complete read-through by my First Reader. Okay, technically he's not the first, but he'll be the first to read the complete novel.
Posted by Gareth D Jones at 2:37 pm No comments:

I've completed the screenplay I was working on, and it's finished up at 46 minutes - just right for a TV episode. I'll come back to editing it in a couple of weeks, but meanwhile I shall start turning my notes and ideas into a coherent proposal for a TV series, and write up synopses for the next few episodes. If it ever ends up on your screen, it'll be brilliant.
Posted by Gareth D Jones at 12:23 pm No comments:

Email ThisBlogThis!Share to TwitterShare to FacebookShare to Pinterest
Labels: Screenplay

The galley proofs of my story One Hundered Billion Dollars arrived today. The short story is due to appear in the July issue of Bards & Sages Quarterly. It's always a worry that I'll read the proofs and instead of finding errors I'll discover I don't like the story so much any more. Not the case this time though. I still love it.
Posted by Gareth D Jones at 5:47 pm No comments:

Email ThisBlogThis!Share to TwitterShare to FacebookShare to Pinterest
Labels: Bards and Sages, Proofs

Last year I wrote my first screenplay, adapting my short story Artefact Nouveau. It turned out to be only 23 minutes long, which isn't very helpful, but I did learn a lot along the way and got some useful feedback from others who know more about the subject than I do.

This week I've started writing a new screenplay, this time destined to be a 45 minute long TV drama pilot. With this script I have much more idea where I'm going, and a whole TV series planned out. None of which guarantees that the screenplay will be any good, but I'm enjoying myself nonetheless.
Posted by Gareth D Jones at 2:01 pm No comments:

The title just about sums it up. Cast of Wonders is a new genre podcast for a YA audience. It accepts reprints, as most podcasts do, paying a token amount for the privelege.

Off to rummage through my hard drive now to see what I can submit...
Posted by Gareth D Jones at 2:47 pm 1 comment:

Email ThisBlogThis!Share to TwitterShare to FacebookShare to Pinterest
Labels: Podcast, UK Mags, YA

I have a small collection of paper magazines to look forward to reading over the next couple of weeks:

All three generaly contain stories that I enjoy and I've been reading them for quite a few issues now.

Meanwhile, in other UK based genre 'zine news:

AltHist #2 is in the works, with stories also accepted for #3.
CossMass Infinities is up to podcast #11, but that was put on line in November.
Dark Fiction Magazine podcast #7 is available. I don't know if it's just my computer, but I can barely read the light blue font. :o(
Spectra magazine is on issue #2, but is now on hiatus due to some technicality that I don't understand.
Singularity will be available for download 'in the coming weeks'.
Midnight Street #14 has been available for a while, now in electronic format.
The Winter 2010 edition of Estronomicon is still available to download.
Hub magazine is up to issue #139, rather impressively.

That should be enough short fiction for anyone.
Posted by Gareth D Jones at 2:38 pm No comments: 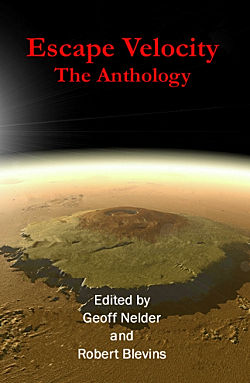 Escape Velocity - The Anthology, containing my short story Relativity, is out now for the kindle and available in paperback on May 12th. Also in the anthology are two people I was talking to at EasterCon recently: Roy Grey and Ian Whates. It's a 360 page book of stories that appeared in Escape Velocity magazine as well as stories new for the anthology.
Posted by Gareth D Jones at 1:05 pm No comments:

Book Review: With A Little Help by Cory Doctorow

If I were to self-publish a collection of my own stories, I probably wouldn’t sell a huge amount of copies. One of the main arguments against self-publishing is the lack of editorial input, potentially leading to the publication of things that should have remained unpublished. Of course, when the author is someone rather well-known like Cory Doctorow, and the stories have already appeared in respectable venues, that does away with the problem.

Read the rest of my review at SF Crowsnest.
Posted by Gareth D Jones at 2:29 pm No comments:

Book Review: Doctor Who – The Complete Guide by Mark Campbell

Oh dear. I can see already that I’m going to end up reminiscing about my own Who experiences rather than getting on with reviewing this book. I guess though that only ‘Doctor Who’ fans are going to be buying Docor Who – The Complete Guide and therefore only those same fans will be reading this review, so they, that is you, will probably indulge me.

Read the rest pf my review at SF Crowsnest.
Posted by Gareth D Jones at 3:27 pm No comments: