I thought that writing stories of 100 words or less was quite a challenge, but recently I’ve become aware of Twitter-based fiction – stories in 140 characters or less.

There are already a few twitter zines and numerous individuals who regularly put out twiction, nanofiction, picofiction, tweets, or twisters as they are variously known.

The website Twiction covers the phenomenon in more detail.

I’ve just sold my first twiction to Thaumotrope. It’s scheduled to appear in October, which means there must be plenty of people out there submitting already.
Posted by Gareth D Jones at 1:21 pm No comments:

I’ve been reading the BSFA special PostScripts sampler over the past few days. It has stories by some very well known authors. I particularly enjoyed three of the stories:

Comber by Gene Wolf – A fascinating idea with great characterisation


I’ve been very pleased with the extra little magazines and booklets from the BSFA this year. Along with the regular magazines and newsletter they are well worth the membership.
Posted by Gareth D Jones at 2:19 pm No comments:

Two of my shortest stories - The Last Adam and Launch - have been accepted by Flashshots, making me a Flashshooter.

Flashshots manages the impressive feat of emailing to its subscribers a 100-word-or-less genre story every day.

I'm now shuffling through my flash fiction collection to see what else may be suitable.
Posted by Gareth D Jones at 12:24 pm No comments:

As you may have spotted, my comments have been spammed again. I've had to introduce selective moderation in an attempt to combat this, so some comments may not appear immediately in future.
Posted by Gareth D Jones at 9:09 am No comments:

Email ThisBlogThis!Share to TwitterShare to FacebookShare to Pinterest
Labels: Blog

Today is St George's day, both in England (where most people probably haven't realised) and in Catalonia, wherer the occasion is marked with a celebration of literature and flowers. 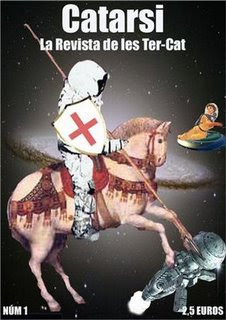 Timed to coincide with this, the first issue of Catarsi is officialy released today, including my story Roadmaker. Unlike most small press genre magazines in the UK that are spurned by magazine stockists, Catarsi is being stocked in several shops in Barcelona and elsewhere. Or you can buy it from their website.

It wasn't until today that I realised the significance of the cover art.
Posted by Gareth D Jones at 2:37 pm No comments:

I received a rejection today for a flash fiction story that I submitted January last year. I'd actually given up on it quite a while ago, so it wasn't too much of a disappointment.
Posted by Gareth D Jones at 3:50 pm 1 comment:

Email ThisBlogThis!Share to TwitterShare to FacebookShare to Pinterest
Labels: Rejection

The Scots translation of Gone with the Window is due to appear in Lallans magazine, but I wanted to put this translation of The Gondolier up here so everyone else could read it too. I really enjoyed this as it’s the first translation I could properly understand. Scots is close enough to English that you can follow it, especially if you read it with a Scottish accent. :o)

The Gondolier
By Gareth D Jones

Posted by Gareth D Jones at 1:02 pm No comments:

In the past week I’ve read the Fiction Special issue of Focus that included the winning stories from the BSFA short story competition. I particularly enjoyed Andrew West’s Rescue Stories.

Is it just a coincidence that both authors are called Andrew?

I’ve also just about finished Bernard Beckett’s Genesis, the shortest novel I think I’ve ever seen published, which makes a refreshing change. I’ll be writing a review of this, to go with my reviews of Eclipse Two and Interzone #221 in next month’s SF Crowsnest.
Posted by Gareth D Jones at 12:27 pm No comments:

Before reviewing for SF Crowsnest I was briefly part of the award-winning Whispers of Wickedness review team, under the leadership of Peter Tennant. A year after the magazine ceased publication the site is about to disappear, but the reviews have all been archived on The Future Fire website. So the following reviews now have new addresses:

...and as if that wasn't enough, Travel by Numbers has also been accepted by Spanish magazine Alfa Eridiani. It's a sizeable PDF download and my story will be in issue #10, due in May.

This takes my publications planned for this year to 25.
Posted by Gareth D Jones at 8:28 am No comments:

I can barely keep up this week and my submission tracking spreadsheet is beginning to smoke.

I’ve heard from the editors of Catarsi that my contributor copy is on its way. The magazine won’t be on sale until April 23rd, when the Catalan translation of Roadmaker will be unleashed in Catalonia.

Meanwhile, the Spanish translation of Parallels, that originally appeared in flash fiction webzine Efimeras, has been reprinted in Breves No Tan Breves.

Astonishingly, this makes 7 stories published in 10 days.
Posted by Gareth D Jones at 11:37 am 3 comments:

The Estonian translation of Travel by Numbers is now on-line at Algernon. Also in this issue is a story by Frank Roger, who has now been translated into 30 languages. I'm hoping to catch up one day. :o)

This makes my 10th publication so far this year, with another 13 already accepted.
Posted by Gareth D Jones at 1:04 pm No comments: 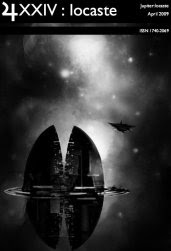 Jupiter XXIV is now out, and includes my flash fiction story Dog’s Best Friend, set in the world of the Roadmaker. I had a few complimentary comments when the original version appeared on my blog, not least the request to reprint it in Jupiter.
Posted by Gareth D Jones at 12:26 pm No comments:

I read the last couple of BSFA Award short story nominees at the weekend. They’re all strong stories, though not necessarily the ones I would have chosen. My vote has been cast, with only a week to spare until the presentation at Eastercon.

As I’ve probably mentioned, I can’t make it this year, so I’ll be looking out for reports form those who do get there.

I'm now reading the new Interzone, with the Focus fiction special waiting patiently behind it...
Posted by Gareth D Jones at 1:21 pm No comments:

Fifth Language of the Week

I'm on a bit of a roll this week. After having stories publisehd in English, Serbian and Welsh and another accepted in Estonian I have yet more news. The Scots translation of my flash fiction story Gone with the Window has been accepted by Lallans, a substantial print magazine from Scotland.

Scots is close enough to English that you can follow what it says, as long as you read it with a Scottish accent. :o) I received the proofs yesterday to check and send back. I especially enjoyed reading this translation as its the first time I can properly appreciate the language it's been translated into. The translator Steve Porter is currently working on translating The Gondolier into Scots too.
Posted by Gareth D Jones at 6:37 am No comments:

This is my 2nd Welsh transaltion on E-Bych, the other being The Last Adam.
Posted by Gareth D Jones at 1:32 pm No comments:

I’ve had stories published in 7 languages so far, not including the ones posted on this site, and I have another 5 languages confirmed, including Estonian.
Posted by Gareth D Jones at 12:18 pm No comments: 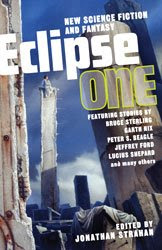 In his introduction, editor Jonathan Strahan points out that he was looking for a very broad definition of science fiction and fantasy, and this volume certainly fulfils that brief. The scope is so broad in fact that several of the stories were barely speculative at all. If you’re looking for high fantasy and space opera then you’ll likely be disappointed. All of the stories are well-written, but I obviously have a very different taste to the editor as I didn’t find many of them very entertaining or satisfying. There were a few that I did enjoy.

Read the rest of my review at SF Crowsnest.
Posted by Gareth D Jones at 12:17 pm No comments:

Two agents of the BSI are sent on a top-secret interstellar mission to conduct ‘Final Inquiries’, a Kendari euphemism for a murder inquiry, in this entertaining space opera mystery. It’s one of a series and as such I felt that although this is a stand-alone story I was missing some of the background information to fully appreciate the plot. There were several references to previous missions and the antagonism between humans and Kendari that evidently formed the backdrop, but nonetheless I was able to immerse myself in the adventure and enjoy the book.

Read the rest of my review at SF Crowsnest.
Posted by Gareth D Jones at 12:15 pm No comments: 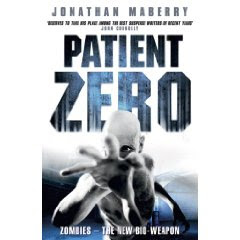 The Department of Military Sciences is a new top-secret agency set up in the US to combat a new terrorist threat – an incurable pathogen that turns people into zombie-like Walkers that could wipe out the entire planet if released. Joe Ledger is a cop recruited to the agency, Sebastian Gault is the pharmaceutical mogul hoping to make a fortune from the cure, and El Mujahid is the terrorist trying to destroy them all. The story unfolds mostly from the perspectives of these three characters and combine to create a book that gives me a big problem: I’m going to have to use a horrible made-up word. It is un-put-downable.

Read the rest of my review at SF Crowsnest.
Posted by Gareth D Jones at 12:13 pm No comments: