Book Review: The Light of Other Days by Arthur C Clarke and Stephen Baxter 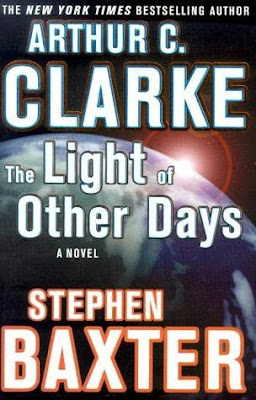 This is the paperback edition of 'The Light Of Other Days', released an unusual ten years after the hardback original. Penned by the late and current chairmen of the British Science Fiction Association, Arthur C. Clarke and Stephen Baxter, it is sub-titled 'A Novel Of The Transformation Of Humanity'. As the book progresses, it becomes evident that the transformation is of that indefinable characteristic known as humanity as much of humanity itself.

Read the rest of my review at SF Crowsnest.
Posted by Gareth D Jones at 2:26 pm No comments: 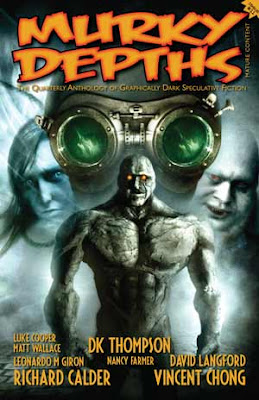 From issue #10, ‘Murky Depths’ has been made available as a PDF download as well as the original print edition. In fact, editor terry Martin has just made a PDF of #1 available too. (You should buy this – it includes a story by me!) So for issue #11 I have obtained the PDF version for the first time instead of the print copy.

Read the rest of my review at SF Crowsnest.
Posted by Gareth D Jones at 12:23 pm No comments:

I've recently received translations of The Gondolier in Slovenian, Ukrainian and Romansch. The latter two are currently looking for a home.

The French translation was rejected by Canadian magazine Solaris as they don't publsih stories that short. They did like the story though and editor Joel Champetier said that the door is open if I'd like to submit again. I impressed myself by corresponding in French. :o)
Posted by Gareth D Jones at 1:46 pm No comments:

My 100 word story Swarm is on Flash shots this week - but you can only read it for 10 days until it disappears.
Posted by Gareth D Jones at 9:01 pm No comments:

It's less than 3 weeks until Eastercon, the British National Science Fiction Convention, takes place over the bank holiday weekend in a hotel at Heathrow. I'll only be there for the Saturday, but I'm hoping to catch up with several authors and editors that I know, and to meet as many more as I can.

In 2007 I mostly wandered round in bewilderment. In 2008 I had more of an idea what was going on, but my day was cut short due to other commitments. Last year was too far away, so this year I intend to make the most of it.

See you there!
Posted by Gareth D Jones at 1:56 pm No comments:

The story was first published in Hub, was podcast by ClonePod and translated into Polish in Fahrenheit.

This is my second story in Italian - the other being the ubiquitous The Gondolier, also on Intercom SF earlier this year.
Posted by Gareth D Jones at 3:03 pm No comments:

Email ThisBlogThis!Share to TwitterShare to FacebookShare to Pinterest
Labels: Inside Every Succesful Man, Italian, Publication, Translation

As I may have mentioned at some point in the past, I recently spent some time learning about screenwriting. Last night, I completed the first draft of my first screenplay!

Soon after Artefact Nouveau was published at the end of 2005, I received an email from an independant film maker and screenwriter in North America who was interested in turning it into a screenplay for a possible future project. He said it was a suitable story as it contained lots of action and dialogue. He also siad that if I could turn it into a screenplay myself it would be more valuable. Of course at the time I had no idea how to do that, and the idea came to nothing.

Then, last year, after learning to appreciate comics courtesy of Murky Depths, I decided to have a go at creating a comic script. I used one of my own very short stories as a basis and found it a fascinating discipline to distill my own prose into scenes and dialogue.

At the end of last year I read Ray Bradbury's Martian Chronicles, the new edition that included two screenplays that he wrote based on the stories. It suddenly ocured to me that writing a screenplay is very like writing a comic script - converting your story to scenes, action and dialogue.

I dug out Artefact Nouveau and had a go at the first page or so. It's very slow work. Then I decided to look up some information on how to write a screenplay and found some very helpful websites. I discovered that thet Bradbury script is what they call a 'shooting script' - with camera angles, transitions and all kinds of detail. What I needed to write is a 'spec script' - with just the bare bones that a director can play with as he sees fit.

So I started again. According to my calculations, the finished story would make a 45 minute drama - perfect for the BBC. Yes, I know, somewhat optimistic for a first screenplay.

What I need now is to find some friendly screenplay critiquing people to tell me where I've gone wrong.

It's been a fun and interesting experience.
Posted by Gareth D Jones at 1:49 pm 1 comment:

The Gondolier has been translated into 5 langauges from the Iberian peninsula. Here they are all together, to read and compare.

Portuguese translation by Mauricio Barbosa. First published in I Lusiadas.

Although I’ve read a few short steampunk stories over the past couple of years, Cherie Priest’s Boneshaker is my first experience of a full-length steampunk novel. An enjoyable experience it was too. There are steam-powered airships, fabulous mechanical contraptions, a mad scientist in an underground base and clouds of poisonous gas that eat away at anything organic and turn people into walking corpses.

Read the rest of my review at SF Crowsnest.
Posted by Gareth D Jones at 12:49 pm No comments:

My 100-word story Swarm, that first appeared here as a Friday Flash Fiction, has been accepted by Flash Shots, the daily flash fiction email subscription. It's currently scheduled for March 16th.
Posted by Gareth D Jones at 12:38 pm No comments: