My short story Remember Yugoslavia? has been accepted by Nature magazine - my third sale to that well-known scientific journal. The magazine has a very tight word count limit for short stories, so it's quite tricky to end up with something suitable to submit to them.
Posted by Gareth D Jones at 3:44 pm No comments:

In the latest mailing from the BSFA was the new issue of Vector, the critical journal of the BSFA, and there, in the midst of an article about comics, my name gets a mention. That was a nice surprise.
Posted by Gareth D Jones at 1:57 pm No comments:

I was at EasterCon in Birmingham on Saturday for the day, and had an excellent day of conversation and catching up. I arrived later than planned due to a train cancellation, only to find that the badge laminator was broken, so I had to lurk badgeless around reception and the arty show for a while. Even during that lurking period I met fantasy novelist Juliette McKenna, Dr Who script writer Paul Cornell, literary agent John Berlyne, BSFA Award-winning author Aliette de Bodard (though she didn’t know it at the time), and Angry Robot editor Lee Harris.

I only attended one panel item during the day – the interview with David Weber – and spent the rest of the day circulating among the fan lounge (drinking tea), the dealer hall, the restaurant / bar, the long corridor between, and various signing sessions.

This year’s double-sided badges meant it was much easier to spot people’s names, but even so there were others who passed in the crowd and disappeared before their name had registered. I’m sure there are others I spoke to whom I’ve neglected to mention, but it was one big whirlwind of conversation and I was glad to meet all of you.
Posted by Gareth D Jones at 7:08 pm No comments:

The latest edition of Focus, the BSFA's mazine for writers has arrived. It includes my article Speaking in Tongues in which I discuss my experiences of being translated and published in numerous languages. There are also articles from Gareth L Powell, Aliette De Bodard and Christopher Priest, among others.
Posted by Gareth D Jones at 7:08 pm No comments:

It's a week until Eastercon, and I've been looking through the guest list to see who I might bump into. There are lots of people I've met before whom I'm looking forward to meeting up with again, plus several authors whose books I've read recently, agents, editors and others I'm hoping to see. Of course, with hundreds of people spread over a dozen or more rooms, much of it is down to chance. But I'm looking forward to it.
Posted by Gareth D Jones at 11:53 am No comments: 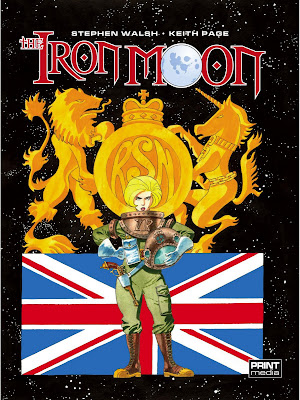 Recently I’ve been enjoying a bit of steampunk and my new discovery, graphic novels. The Iron Moon is a steampunk graphic novel, so I was pretty excited about reading it. It turned out to be great fun, mixing marvellous Victorian steam-powered inventions with aliens, Brunel-style space stations and cyborgs. Read the rest of my review at SF Crowsnest.
Posted by Gareth D Jones at 2:22 pm No comments: 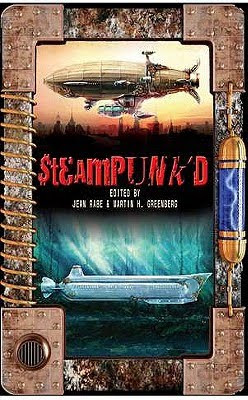 I’ve read a fair amount of steampunk recently, so an anthology entitled Steampunk’d was rather tempting. The stories in this anthology are mostly set in alternative Victorian settings, but there are even more alternate histories where the era is not named after the British monarch at all. The book features a fine selection of everything you might want from the genre – steam trains, dirigibles, goggles, inventors, gadgets.

Read the rest of my review at SF Crowsnest.
Posted by Gareth D Jones at 1:19 pm No comments:

Inside Every Successfull Greek

I discovered today that my story Inside Every Successfull Man was published last june in issue #512 of 9, the weekly SF / comics supplement of Free Press, the Greek national newspaper. This is the fifth appearance for this story, following:

Unlike a few other translations, where I made the discovery by chance, tis time I was contacted by the publishers, who want to pay me. :o)
Posted by Gareth D Jones at 3:58 pm No comments: