The Road to Israel

The original short story Roadmaker has been published in Hebrew in the webzine Bli Panika (Don't Panic!). This is my second story publishhed there, and the fourth language for Roadmaker.
Posted by Gareth D Jones at 11:43 am No comments:

Immersion Press publisher Carmelo Rafala and editor is interviewed on SF Signal. He talks about current and forthcoming projects, including the Immersion Book of Steampunk.
Posted by Gareth D Jones at 12:38 pm No comments:

I’ve finished part 4 of Gap Years and almost reached 50,000 words. I’ve settled into the routine that I developed towards the end of writing Roadmaker. Both novels are divided into parts averaging 10,000 words, divided into subsections of varying lengths. I save each part as a separate file. I try to write each subsection in one sitting so that I start each writing session on a new scene. I wrote without looking back. Only if I’m in mid-section I read the last couple of paragraphs to remind myself where I was.

At the end of section 2 I went back to edit section 1. This is a fairly light edit consisting of:

• Spelling and grammar corrections
• Changing, adding or deleting the odd word or sentence
• Checking for inconsistencies
• Adding ideas that have developed later but need to be introduced earlier

The advantage of this is that I’m reading stuff I wrote two or three months earlier, giving me a fresh perspective.

When I have a clean draft I send it off to my writing group for critiquing. I read the critiques as I receive them, to get an overall feel for the problems that are most commonly pointed out. When I have them all I sit down and go though them one at a time, making corrections and amendments to the manuscript.

I like to do this one section at a time so that any major flaws are picked up early and I can avoid them going forward. This critiqued version is then left until I finish the novel.

After each part is written, checked, critiqued and amended I then go back to the beginning for the third and final edit, by which time there is hopefully not too much to change. I found last time that the main thing I picked up on the final edit was the unnecessary words or sentences that could be deleted to tighten up the text.

I’ve read about several authors’ methods of drafting their novels, but this seems to work for me.
Posted by Gareth D Jones at 12:28 pm No comments:

A series of rejections all arriving within a week have proven disheartening. I've found every year that August is very quiet for responses. Then everyone returns from holiday and sends their replies at once. Unfortunately this time I got lots of rejections. They were mostly from pro markets though and I'm now determined to continue aiming high even if it takes longer to find a home for my new stories.

On the bright side I have a new translation of The Gondolier, this time in Afrikaans - its 32nd language. I've already found a possible market for it.

My blog is being targetted by spammers at the moment. I'm suddenly getting a dozen spam comments a day. I don't know what I've done to deserve this unwarranted attention. It does mean that new comments may not appear immediately as I'll have to moderate all comments now.

I'm just about keeping up with my schedule to complete the first draft of Gap Years by the end of the year. This means that several short stories and various other projects will have to wait their turn. I've already worked out that I have enough writing to keep me busy for the whole of next year at least. After that maybe I can start on my new novel Promised Land that has been a vague outline for years.
Posted by Gareth D Jones at 1:49 pm No comments:

I've read 2 magazines over the past few days:

Jupiter XXIX, with 5 stories, of which I'm undecided as to my favourite. Mike Wood's The Bottle Garden or Rosies Oliver's Agents of Repair.

The latest edition of the BSFA' critical journal Vector also arrived. The theme this time was children's and YA genre fiction. Lots of books were highlighted, none of which I read as a child. I talked about my early reading habits in this post. What were you reading in the old days?
Posted by Gareth D Jones at 2:38 pm No comments:

I came across a new UK based genre magazine this week: Alt Hist. From their mission statement:

Alt Hist’s mission is to provide readers with entertaining and well-written short stories with a historical setting, whether portraying actual events or events that could have happened.

They plan to produce electronic and POD copies a and will pay royalties to authors. Looks like an interesting model they're attempting to work with. No confirmation of a date for the first issue yet, but they're open to submissions.
Posted by Gareth D Jones at 11:48 am No comments:

Last night I completed part 3 of Gap Years and in so doing passed the mythical 40,000 word marker. Gap Years is now officially a novel. Projected final wordcount is 90,000 words. Still aiming to finish by the end of the year.
Posted by Gareth D Jones at 11:45 am 1 comment: 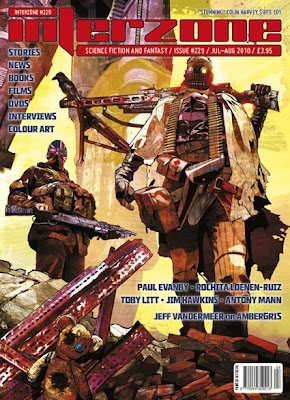 Interzone seems to be giving more attention to artwork recently, with big full-page or even double page illustrations to accompany each story. As ever there is news from the world of SF, courtesy of David Langford’s ‘Ansible Link’ as well as a selection of book and film reviews and an in-depth interview, this time with Jeff Vandermeer.

Read the rest of my review at SF Crowsnest.
Posted by Gareth D Jones at 1:53 pm No comments:

Book Review: Mammoths of the Great Plains by Eleanor Arnason 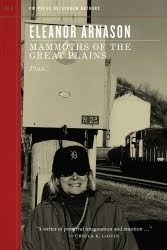 Mammoths Of The Great Plains consists of three parts: the title story, plus the transcript of a speech entitled ‘Writing Science Fiction During World War III’ that was first given at a convention in the US, and a lengthy interview with author Eleanor Arnason.
Read the rest of my review at SF Crowsnest.
Posted by Gareth D Jones at 12:49 pm No comments: 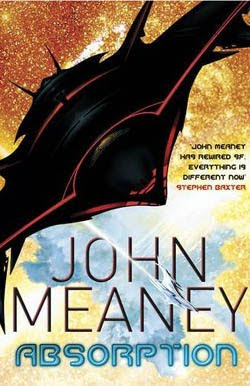 Absorption is the first volume of Ragnarok, a new space opera trilogy by John Meaney that takes us from a thousand years in the past to half a billion years in the future, with several stops in between.

Read the rest of my review at SF Crowsnest.
Posted by Gareth D Jones at 11:47 am No comments: