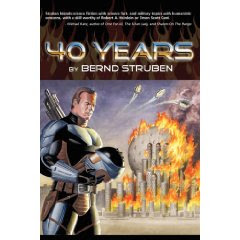 In a desperate bid to populate the Galaxy ahead of the dreaded Pfrlanx, a battalion of Augmented Combat Personnel spend their lives travelling from world to world to conquer the locals and subjugate them to the Empire of Mankind. At first the précis sounds a bit clichéd and the soldiers initially come across as stereotyped, but in this novel Struben has developed a complex and long history rich with personal tragedy and large-scale atrocity that amounts to a very powerful piece of work.

Read the rest of my review at SF Crowsnest.
Posted by Gareth D Jones at 11:15 am