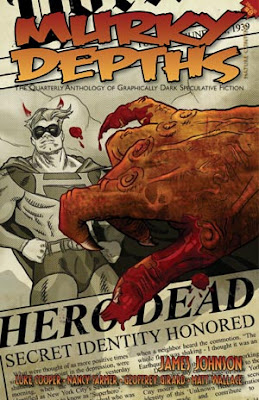 The fact that I get a mention in the editorial just makes ‘Murky Depths’ #8 even better than usual. I’ve been won over by the graphic strips and my first comic script has been accepted for a future issue. That’s still a way off though, so what does this issue bring? Well first of all another strikingly different cover. Editor Terry Martin is evidently intent on displaying as wide a range of graphic styles as possible and this is shown not just by the cover but throughout the magazine.

Read the rest of my review at SF Crowsnest.
Posted by Gareth D Jones at 1:33 pm