The Gondolier can now be read in Hindi, appearing in the March-May issue of Vigyan Katha, the only Hindi SF magazine, published May 10th. The Gondolier appears on the very last page. 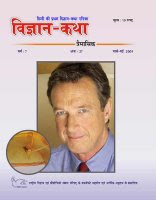 This is a rather late announcement due to the fact that even after google.translate had done its bit I didn’t realise that you could download a PDF of Vigyan Katha from their website. There’s no TOC on the website so I didn’t know my story was in that issue.

Hindi is my 12th language, the 8th new language this year, and the 4th that The Gondolier has been published in. Of course you can also read it in several other languages on this blog:


Cornish, Greek and Welsh versions are also due to be published this year and I have another 7 translations looking for a home that may end up here too.

I've already been published in Europe, North and South America and Australia and I can now add Asia to my map.
Posted by Gareth D Jones at 12:16 pm