Book Review: The Hitchhiker's Guide to the Galaxy 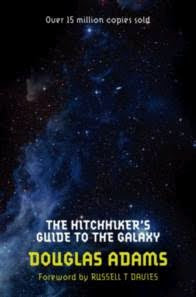 The Hitchhiker’s Guide To The Galaxy is one of those books that made such an impact on its release that it has become a movement as much as a book. The new thirtieth anniversary edition continues the quirkiness of the trilogy, featuring a badge, postcards and a DIY cover with a selection of stickers. For those new to the Hitchhiker phenomenon and now slightly puzzled, yes there are five volumes in the trilogy.

Read the rest of my review at SF Crowsnest.
Posted by Gareth D Jones at 12:59 pm