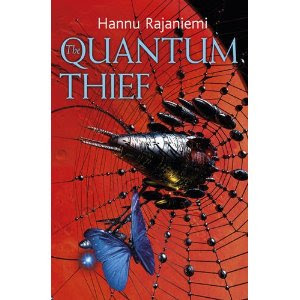 In a brilliantly imaginative future, Hannu Rajaniemi has created a distinctive world as the setting for his debut novel The Quantum Thief. Set mostly in a city that moves across the surface of Mars, it’s full of quantum technology, physically and mentally augmented humans, secretive vigilantes and a whole host of bizarre developments that initially left my brain in a whir.

Read the rest of my review at SF Crowsnest.
Posted by Gareth D Jones at 1:20 pm