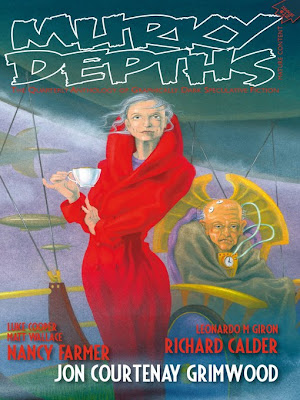 The cover of this issue of Murky Depths is a lovingly rendered steampunk image from Nancy Farmer, who has supplied some wonderfully atmospheric interior artwork in the past. The illustration accompanies Jon Courtenay Grimwood’s Glory Of The Empire in which a disillusioned young man launches himself on a rickety manned kite to attack the emperor aboard his grandiose airship.

Read the rest of my review at SF Crowsnest.
Posted by Gareth D Jones at 1:43 pm