I've been following Gareth L Powell's writing for a few years now, since we appeared in the same TOC in Aphelion magazine. Gareth's enjoyable space opera novel The Recollection was published last year. This question may not make much sense if you haven't read the book, but I don't want to spoil anything by explaining.

Q. If you were swallowed up by The Recollection, who (from anywhere or anywhen) would you hang out with?

A. If I were swallowed up by The Recollection, I’d get Jack Kerouac, Philip K Dick, Walt Whitman and Hunter S Thompson together for a night of wild talk; I’d argue about science fiction with JG Ballard, Douglas Coupland, Cordwainer Smith and Samuel Delany; and I’d get Stephen Hawking, Isambard Kingdom Brunel, Marilyn Monroe, Grace Marguerite Hay Drummond-Hay, and Brian Cox around a table and hang on their every word. 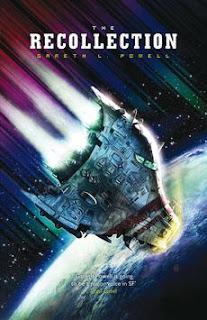