I'm quite a fan of translations, foreign-language SF and languages in general. My stories have been published in twenty European languages, and nominated for awards in Estonian and Catalan, and one of my short stories appears in another fifteen European languages on my website, so I was very pleased to be sent a review copy of the ‘Anthology Of European Speculative Fiction’. The collection features both stories translated into English and originally written in English by authors for whom English is a second language. And two English people. 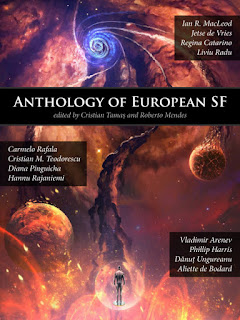 Thank you very much for your kind and relevant review.
Allow me, please to translate it into romanian and to post it the Romanian Science Fiction&Fantasy Society’s Magazine (www.srsff.ro/).
You’ll be credited as author, I will mention your permission and insert a link towards the original place of publication.
Thank you again.

That would be great, thanks!