Douglas Smith is an award-winning Canadian author whose work has appeared in twenty-five languages and over thirty countries. You can see already why I feel an affinity for him. His fiction includes the urban fantasy novel, The Wolf at the End of the World, and the collections Chimerascope, Impossibilia, and La Danse des Esprits.
Doug is a three-time winner of Canada's Aurora Award, and has been a finalist for the John W. Campbell Award, CBC's Bookies Award, Canada's juried Sunburst Award, and France's juried Prix Masterton and Prix Bob Morane. A short film based on Doug's story "By Her Hand, She Draws You Down" won several awards when it toured film festivals around the world.
I took the short cut to Canada, via Greenland, and our teams of huskies sniffed around each other as we dismounted our sleds and settled down to drink tea from thermos flasks and talk about writing and translations. 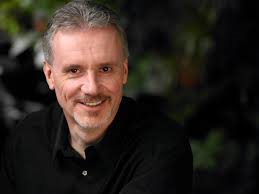