A couple of weeks back I watched ‘The Three Doctors’ again, which was originally aired before I was born, but I’ve seen at some point in the murky past. I like all the ‘Doctor Who’ crossover episodes, so I was keen to see what Paul Cornell has devised for his five-part comic event ‘Four Doctors’. 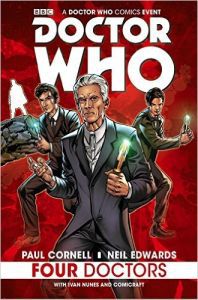