‘Europe At Midnight’ is Dave Hutchinson’s follow up to his debut novel, the anarchically enjoyable ‘Europe In Autumn’, which I reviewed here in September 2015. I say follow-up rather than sequel because this book doesn’t follow the same character or continue the story from the first novel but the setting is the same and some of the elements introduced in the first book are followed up here. 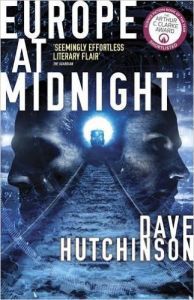