‘Time Siege’ is Wesley Chu’s sequel to ‘Time Salvager’, which I reviewed here earlier in the year. It has another beautifully atmospheric cover depicting the ruins of a future Earth where the cities, New York in particular in this book, are overwhelmed by pollution, rampant vegetation and savage tribes. 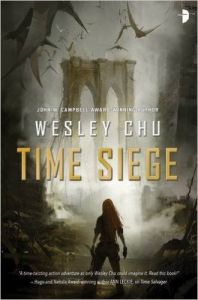