Unlike half of the world’s population, I haven’t read Andy Weir’s debut novel The Martian, but in common with the other half of the population I did watch the film and rather enjoyed it. Andy Weir returns to the world of populist hard SF with Artemis which takes us this time to the Moon, location of the eponymous lunar city. 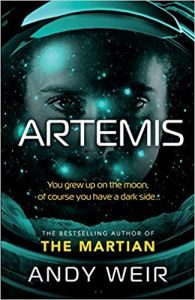