In Adrian Tchaikovsky’s 2015 novel Children of Time, we followed some of the descendants of humanity as they travelled among the stars on voyages of hundreds or thousands of years, looking for earlier colonies of humans that had been sent out from a now dead Earth. This sequel, Children of Ruin, follows a similar format, alternating the account of one of the early exploratory and colonisation missions, with a follow-up mission that arrives in the same system thousands of years later. 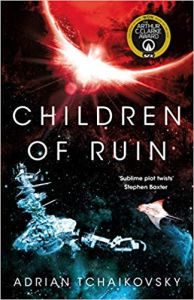 read the rest of my review at SF Crowsnest.